My name is Lisa Simone, and I am a person in long term recovery. For me, that means I have not used alcohol or any other drugs for over thirteen years – for that I am beyond grateful.

Both in my addiction, and in my recovery, I have been impacted by the disease in countless ways, loosing many friends and family members to accidental overdose. My name could have very easily become a statistic had I not sought help when I did. As a child, I was extremely shy and fearful of the world around me and would soothe myself with TV and sugar to feel safe. As I grew, this way of being became more of a prison as I avoided the unknown at any cost. When I found substances, they became a new escape for me – allowing me to override my shyness, fear, feelings, and uncertainty.

I was a natural athlete growing up. In junior high I stayed connected to myself through sports and my teammates. I was the tall and talented one, who could always perform. I’d be played on the starting line up without having to put in much effort or pay attention at practice. This attitude and lack of effort would eventually backfire for me in high school, when I didn’t make the cut for our basketball team. I never tried out for a team again. My focus then shifted to ‘having a good time’ with my friends and partying.

When I was 21, I met Cameron, the man who would become my first husband. He was the ‘guy-version’ of me: big energy, full of life, and also just wanted to have fun. Both of us loved to drink. Cameron worked in the oil and gas sector and many of his jobs were located in the southern regions of the United States, and eventually I moved there to be with him. The US was very different from anything I’d ever been exposed to from growing up in Calgary – there was blatant racism, recognizable poverty, and some really bad parts of town. Eventually I got to know those bad parts of town far too well. Cameron was paid extremely well for his work, and we were young and foolish. We started using crack cocaine together. At first, it started out as monthly thing, then we were using weekly, and soon after we were hooked, and completely out of control.

While living just outside of New Orleans and hitting new bottoms daily, I discovered I was pregnant. All drugs and drinking stopped. By the grace of God the day after I found out about the pregnancy Cameron was transferred for work and we moved up north. I had a great pregnancy and birthed a healthy baby boy who we named Braden. We had begun a ‘new chapter’ which focused on a wholesome family that we were building together. I truly believed ‘party life’ was behind me – I was so wrong. Soon, Camron was transferred back south, and with our move back the drug use returned. You could say we did an excellent job of hiding our addiction from our family, friends, and co-workers – that is to say that no one really knew what went on behind ‘closed doors.’

Then, just after our Braden turned two, my world came crashing down. I woke up after a night of drinking and using to find Cameron dead of an overdose. You’d think I would have quit using that day, but although his life ended, my addiction continued: in shame, despair, and confusion. I couldn’t cope with his death or my anger at God for taking him without leaning on substances. Not only did Braden lose his Dad that day; he also lost his Mom to the bottle.

I spent the next year and a half self-isolating in the prison of my disease. Friends left me. Family got quiet. None of them had the words to reach me, so they said nothing. My pain and chaos grew until it was unbearable, and I realized something had to change, or I was going to die too.

On New Years Day in 2001, I went and got help through a local 12-step fellowship. This sobriety journey felt so painful, raw and uncomfortable, as many of the emotions I ignored after Cameron’s death began to surface. I was forced to work through them as using was no longer an option and there was nowhere to run – I had to take and feel my feelings with me wherever I went.

With program, determination, and a sponsor, I got my life back on track and fully embraced my newfound recovery. I met a great guy named Chris, who was a single dad with a daughter the same age as Braden and I had reinvented myself. I thought that because things were so different now… my relationship to alcohol be different too? So, I tried it again.

With that one decision, I was right back into the world of my alcoholism – familiar, reliable, and unfeeling. I also found a whole new world of prescription pill abuse. I stayed here for seven years.

Along the way, Chris and I got married, blended our families, and had two more children. Over those seven years, I could only stop drinking and using for my pregnancies. But then, I was right back at it again. Although we built a beautiful life for our family, I was still a talented ‘master of disguise.’ While everything looked good from the outside, on the inside, I was barely holding it together. Every time I tried to stop drinking and using, I couldn’t. My disease had progressed to a state where I had lost the power of choice.

It’s true I disliked who I had become, but I was also terrified of change. Deciding to enter a life of recovery and walk away our addiction is essentially agreeing to change one of the biggest parts of ourselves. In fact, everything needs to change. The benefits of such a remarkable shift are of course amazing, but it’s also a giant leap into the unknown. Even though I had been in recovery before, this time felt completely different. I knew myself better, and with that knowledge came the terror of what was underneath the mess. Would recovery hurt more? Could I face the demons inside me I had been stuffing down for so long? Would I even know how to be happy without alcohol or pills?

But the truth was I was sick and tired of being sick and tired. I knew what I would be if I stayed addicted – and I had to trust that I could this this again. One – day – at – a – time.

What I know now, is this is a disease we cannot fight alone.

I needed connection. My program included recovery meetings, yoga, Buddhism, meditation, self care, therapy, service, prioritizing wholesome activities, family, and friends. Recovery has given me a life I love, and I have also been blessed to make my living helping others.

In my second year of recovery I started work at a local men’s treatment centre called Fresh Start. While working there I went back to school, stayed sober, developed myself and flourished in my career, eventually working as their National Communications Director. In my 10 years with the centre, I also cofounded a National Advocacy non-profit called FAVOR Canada (Faces and Voices of Recovery) with some other bad ass sober women.

In 2016 I completed my 200-hour certification for yoga teaching. Upon completing that I was certified to teach Y12SR which blends yoga with the 12-step recovery program. Then in 2017, Chris and I bought a commercial/ residential building on the water in Niagara Falls, Ontario and we moved into the upstairs apartment with our two youngest kids and dog. On the ground floor, we built a community integrated yoga studio that also hosts Y12SR meetings twice weekly for those of us in recovery (from whatever ails us).www.bridgewateryoga.ca

In 2018 I completed my certification for addiction counselling and recovery coaching. Next to parenting my four kids, I have found deep meaning in this work. As a lifelong learner I continue my long-term personal growth and discovery with my personal development and practice of the Dharma. My mantra is “More will be Revealed” and “Right Now It’s Like this” – My daily practice is living with ease and presence and not getting rattled by the small things. As for the big stuff, I do my best to allow myself to feel it all and move through it with grace.

and Grace it is! 2022 has allowed me to expand my service further with a charity founded by my in-laws called Amazing Grace Canada (AGC) www.amazinggracecanada.ca; helping people affected by addiction in developing countries. This work allows me to lead with love and help in places where there isn’t a lot of support but a lot of need and want for change.

My recovery is a living testament to what is possible. So, what are you waiting for? This adventure just keeps getting better ……lean in…More will be revealed. 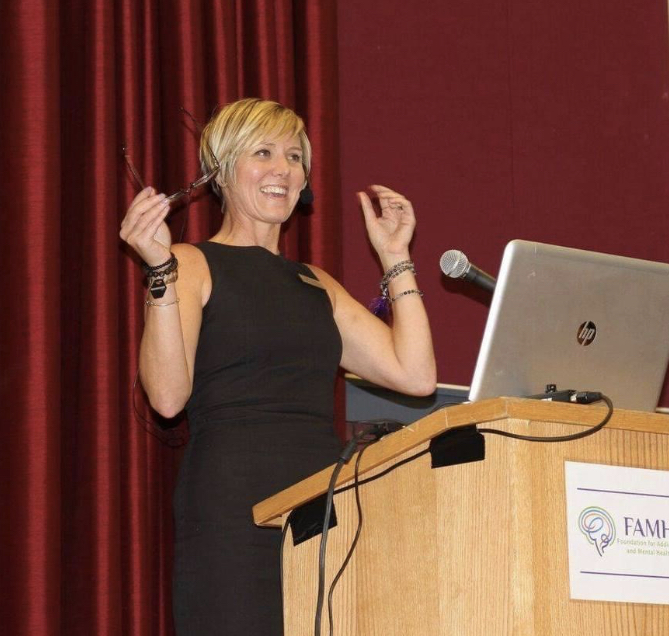